I’m back from a sunny (!?!) and fun-packed week up in Scotland’s craggy and beautiful capital city.  For those readers not in the know, the Edinburgh Fringe Festival is one of the most important events on any comic’s calendar…certainly in the UK but, increasingly, abroad too. In fact, the US-based comics of note who came over this year include Kyle Kinane and Michael Che. 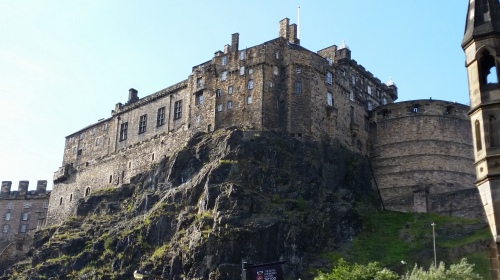 The whole city has a deliriously giddy arts-camp sort of feel with every other person you encounter ready to flyer you for their show.  As most shows typically run in hour long slots, you can make a mission of it and try to cram up to 7 or 8 shows in a day (that’s allowing for the oh so necessary beer and pie breaks–if you don’t drink or eat you could probably fit more in).

I had planned on going up for the whole run this year, which would have been my first time doing so, but my plans changed when I didn’t get the venues I’d applied for.  Doing a full run in Edinburgh is hellapricey. You have to consider your accommodation for the  month, which is always extortionate, your promotional costs, eating, drinking, etc… As crucial as the experience is, doing the entire run at the Fringe is a slog, a drain, and a real test of your stamina. Some people barely make it out alive. I snapped a picture of this shrine to desperation on Niddry street.

Whatever gets you through the night, comedy soldier.

To be fair, I got a later offer of a midnight slot at a venue…but it wouldn’t have suited my comedy. I’m not aggressive. I’m not blue. I’m an American lesbian comic nerd abroad.  I don’t need to invite more heckling into my life. As such, I’m saving my pennies until next year. I’ll apply again and cross my fingers for the venue lottery to swing my way.

Happily, however, I got to go up for a week of shows.  I was hosting Gag Reflex’s compilation show (Gag Reflex Presents…) and improvising with ComedySportz.  It was a real treat to be asked to work with Gag. They are a powerhouse of a comedy agency in the North and the professionalism with which they run and promote their acts and gigs is refreshing and emboldening (special thanks to Forest, Connor, Alex, and Hannah). I was on the bill with 4 acts:  Chris Washington, Sean Nolan, Benji Waterstones, and Tom Lucy. I’d never worked with any of them previously and I found them all to be delightfully funny, cool guys.  Also, The Boy With Tape On His Face stopped by to do a ten minute set. Unbeatable. 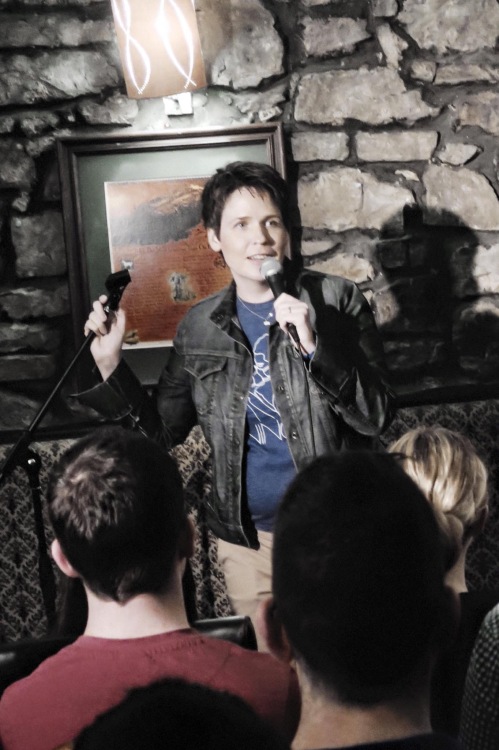 The ComedySportz shows were also a treat. Initially concerned about our 7:30PM slot…we found, in the long run, that being a kid-friendly show at that hour may have actually benefited us as there was much less competition around at that time.  We had lovely, up-for-it crowds, genius children, and quite a few folks who came back to 2 or 3 shows.  Frosting on the cake? We got to play with the Chicago team’s Nathan Jansen, Nick Semar, and Bethany Remeley. Amazing improvisers and a hell of a show.

Now, I’m back from the fun, I’d like to pass on some recommendations for gigs up there…if you’re planning on heading up before the close of the festival (and you totally should).

What I done saw this year:

Baby Wants Candy:  I see this show EVERY year. Why would I go and see the same show for £14 pounds every dang year? Because it’s different every time. BWC is long-form musical improv (with a full band) as performed by some of the world’s best improvisers. They, unfailingly, make me laugh my face off. I hope they never stop spending their August in Scotland.

Nick and Nathan of BWC

Speaking of classy improv:  Austentatious.  This London-based improv show has been in receipt of glowing reviews since they brought their show up north and I finally got to catch them this year. It’s pitch-perfect, knowing, clever-silly fun. May have to make this an annual exercise as well.

Went and saw my good buddies at Gein’s Family Gift Shop for their ‘Volume 2’ hour of sketches. Darker and funnier than ever, Kath Hughes gets a bit more stage time and is perhaps the most menacing of them all. My friend Kat came to their preview at Sidekick recently and now feels like comedy is ruined forever because nothing will ever be as good.

Kath and I got to try the new wings joint in Edinburgh (It’s helpfully called ‘Wings’) and it’s amazing. Lots of varieties from gloppy blue-cheese to buffalo ranch, a fun beverage list…and…most importantly…a shit ton of pop culture crap just strewn about the joint. The tables are all themed. There was Star Trek, Star Wars, Doctor Who…we got to sit at the Jurassic Park table.  You need to go there. Regretfully, I did not vine a wee video of my water glass wobbling.

Kath Hughes, being a winner, per usual.

Canadian comic Mae Martin is doing a free gig at City Cafe this year. Her solo show ‘Us’ was excellent. Her affable and confessional story-telling ability made the hour fly by.

Kyle Kinane. A thoughtful buzzsaw of comedy. Of course he impressed. But then again, I’m a fan. Apparently he mixes up different material every night. No two shows are exactly the same?

AFVS: Another Fucking Variety Show. A Gag Reflex show, legend of the burlesque and cabaret scene, Lili La Scala comperes a glorious variety of acts onto the stage. On the night I attended, Christina Bianco (as featured on Ellen, impersonating everyone from Babs to Whitney) was there.

I didn’t have time to see all the shows I would have wanted to. But, here’s a few more shows that I saw preview versions of and which are also absolutely killing it with amazing reviews at the festival:

Peter Brush: Older The Oldest Dog That Ever Lived

Jonny Pelham: Before And After

I can also recommend a whole fleet of comedy friends and colleagues whose Edinburgh shows I HAVEN’T seen but who I know for a fact, are amazing: Joby Mageean, Red Redmond, Freddy Quinne, Dan Nicholas, Kiri Pritchard-McLean, Joe Lycett, Steve Bugeja (who will be at Sidekick Comedy in September), Harriet Kemsley, Bobby Mair, Phil Ellis, Seymour Mace, Silky, Martin Mor, Sam Gore, and a buh-billion more, so I’ll have to stop now. The point is…there are tons of shows, both free and ticketed, that are worth your time and money. The city is absolutely lousy with choice.

Get yourself to Edinburgh!