I’m convinced that RuPaul is a magical alien from an advanced civilization who has descended to Earth to spread fabulousness and that one day, her space-ship will return and she will leave us for her home planet. So, appreciate her whilst you can, citizens of Earth!

I’m a bit late in catching the RuPaul’s Drag Race fervor, we’re now well into the 6th season,  but now that I’m here with the rest of you fanatics, I’m loving it. 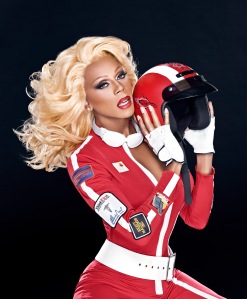 I’ve binge-watched seasons 2-4 (I was told to skip the first season as it was rather low budget and still finding its feet) and I’m 5 episodes in to season 5. The goal is to catch up to season 6 entirely so that I can tweet and make comments and throw shade with other fans in real time. (Cheer me on, readers, in this most heroic of heroic goals.  A true test of human endurance and Cheetos consumption–it’s my go-to TV snack as of late!)

I had avoided watching Drag Race for the last few years because I felt so DONE with reality television. I didn’t want to spend time investing in yet another manipulative yet brainless exercise in ‘unscripted’ (but totally coerced) television when there’s so much fantastic scripted television out there to watch. (I still haven’t watched the final season of THE WIRE, but shhhhh….it’s a dirty secret.) Furthermore, I hate ‘reality’ TV stars. If one more ‘real housewife’ becomes a real household name, I’m leaving my body.

Speaking of ‘real’, of course now that I’ve been consuming these shows at such a clip, I’m starting to use drag lingo way too much in my everyday life. I reckon it’s like when people binge on too much BBC America, they just pick up the colloquialisms. They start talking about rubbish and crisps, car boot sales and demanding canapes on silver trays instead of garbage, chips, garage sales and eating out of the trash can.  I’m particularly fond of the terms ‘kiki’, ‘reading’ & ‘realness’. In season 2, Tyra Sanchez, in bragging about her natural feminine beauty rattles off this gem. “I’m daytime, I’m real!” This hearkens back to PARIS IS BURNING…a wonderful documentary that I can’t recommend enough. It pulls back the curtain on the Harlem drag balls of the early eighties (from which Madonna ripped off the dance-style for her “Vogue” video). The drag balls in Harlem housed an amazing tradition for a hugely interesting subculture of African American drag queens and the occasional king. And when they ‘walked the ball’, they would do their best to look ‘real’ in any category. And the categories were broad…I’m talking anything from teenage girl babysitter to military man, to street thug. Keeping it ‘real’ was the name of the game and this is sometimes much different to the drag we see in something like PRISCILLA QUEEN OF THE DESSERT for instance…a super fun film, but one that shows a more fantastic and outlandish side of drag performance.

Here’s a clip from PARIS IS BURNING that explains ‘realness’.

If I had to walk at a drag ball, I think I’d shoot for Seth Rogan realness. I’ve got enough novelty teeshirts and big sneakers to just make it work, I reckon.  I can’t stop using ‘realness’ in my life now. Recently went to a costume party where the theme was ‘heroes’. Of course, my first urge was to dress up like a lesser-known superhero, being a giant fangirl and all. Maybe Nova or Artemis.  But I thought about it longer and not wanting to be so predictable, I decided to diverge from my usual leanings. I figured I might be able to pass for Annie Lennox a la “Sweet Dreams Are Made Of These”. I put a can of orange hair spray and an electric blue tie to good use and was pretty happy with the results. 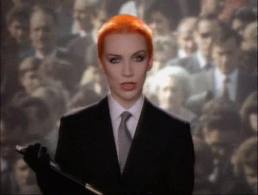 Anyway, enough of my lookie-likie success, and back to the show. Drag queens, largely, are versatile, artistic, funny, and talented performers and I’m truly happy that this show has brought it back to the front of the American pop-culture bus. When I was a student in New York City, I remember drag queens being absolute club royalty.  I was no club kid. I probably went 6 or 7 times to the BIG clubs of the day when I was a student. (I’m talking Limelight, Tunnel, Club USA…90s clubkid era). But, when I did, I knew you had to look like a fabulous freak to get in. I remember hitting TJ Maxx to look for weird items to piece together. I settled on a curly sky blue knit top and gold lame pants for my first ever visit. That was a good look. Another one was a dark silver-sparkled leotard with black rubber trousers and Doc Martens. That look get me my butt pinched by a drag queen who was using the lady’s facilities. It was like the biggest compliment ever. I was over the moon. My butt? Noticed by a drag queen! I high-fived myself in congratulations.  Good drag queens are like the unicorns of the gay world. Magical, horny, and with great hair.  I even went to Wigstock and got to see the amazing Lady Bunny perform.

Most of my favorite characters on DRAG RACE  have been the ‘comedy queens’. Girls that were able to be charming and funny as WELL as dress up all fancy and walk in heels (notably, Pandora Boxx, Jujubee & Jinkx Monsoon). I’m a sucker for the ‘nice’ girls.  I don’t generally favor the contestants who are just pretty faces or the ones who are cruel in their game-mastery.  I grudgingly came around to loving Willam, which surprised me because she’s a bit of a dick.  Willam, initially at least, came across as much too cruel to be funny. But, she’s broken me down. I can’t resist her evil charms. She’s got a hilarious channel on YouTube.  Willam’s Beatdown

It shouldn’t be surprising how funny so many of the contestants are. Being in a (sometimes) persecuted minority can really help develop those comedy muscles. I loved Pandora Boxx’s persona so much on the show that I subscribe to her Facebook page now. Recently, she posted this video. It’s of Coco Peru playing GTA. If you like video games and/or laughing, you will enjoy this:

The show succeeds in presenting fresh takes on reality-challenge tropes. One of my favorite (and one which returns every year) is “Snatch Game”. It’s a take on MATCH GAME, with the queens all having to do their best and most entertaining celebrity impersonation. Of course, it’s always a game where the wittier, not prettier, girls succeed. Pandora Boxx doing Carol Channing was a personal fave. RuPaul is a masterful host who is able to be a mother figure to the contestants without it coming across as too cloying, a black-belt in pop-culture knowledge, and an award winning punster and catchphrase generator. One of my favorite Ru catchphrases is when, after consulting with the panel of judges, she shouts ‘SILENCE!’ (usually when no one is even talking). Here is a supercut of those moments:

Honestly, why RuPaul hasn’t been the comic lead in a Broadway play yet, I don’t know.

All in all, I’m loving this show and am thrilled by its success. And of course, since we’re at it, let’s brainstorm drag personas for me (not that I’d ever try my hand at it. I’m far too lazy to learn how to apply make-up good).

Further Reading (The library is open!):