It’s not too late to throw out a wee post about some of Halloween’s best offerings this year, is it?

Here’s a compilation blog featuring some of the best Halloween-related stuff that I have seen this year.

If you read this blog regularly you know that I love me some Halloween.  I had complained a year or two ago that the UK simply didn’t do it up large like the Americans do.  But, I think that’s changing.  Maybe businesses finally see how easy it is to cash in on Halloween-related crap, theme nights at bars, fancy dress parties, etc…

I have to say, one of the best thing about Kraft Foods (an American company) taking over Cadbury’s has to be that we now have THESE fine foodstuffs:

Really, England, I don’t know what you were kicking up such a fuss about.  When the takeover happened everyone was all worried that the quality of the chocolate would suffer…traditions would crumble…we’d shit it all up with our tackiness.  Obviously you were wrong.  We just added some awesome.  You’re welcome, Britain.

Ok, so what else is worthy of our attention this year?  The doggy dress up competition in NYC is always worth a chuckle.  Here’s the link to some of the best:

Nothing tops that bulldog, for me.

Well…maybe THIS Staffy does.  I lifted this from Pedestrian TV. (All credit due)

In the human costume category, I have to give it up to my cousin, Emily Heinrich.  When I was a kid, I was spoilt by a mother who made costumes herself–amazing constructions.  With the help of patterns from JoAnn Fabrics, I was often the best-dressed kid on my street.  My Mom must’ve lost her nut the year I chose the ‘elephant’ pattern.  It was pretty complicated.  She did a great job with those ears and tusks and trunk though.  Love you, Mom.  Emily is carrying on that tradition…perhaps even a bit further…as her creations don’t look like you could even buy a pattern for them.  Check out how she dressed her boys this year: 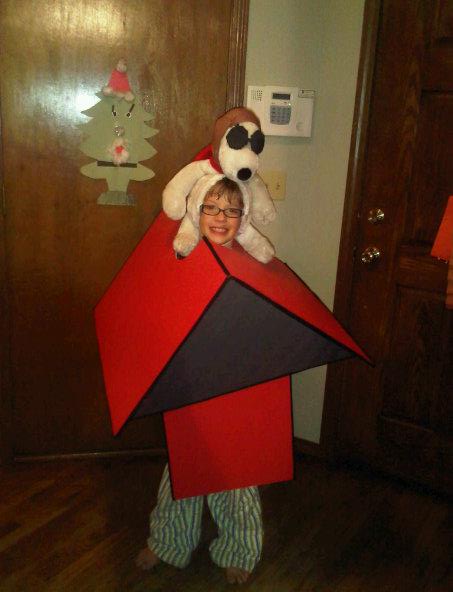 Speaking of crafty people, here’s a little gem that someone forwarded me…allow me to give it a proper introduction:

“Hey lady…looking to throw a kicking Halloween bash this year but CAN’T afford fancy store-bought decorations?  Well, look no further than your bathroom cupboard.  As long as you’re still menstruating, you’ll never be without the potential to terrorize folks!  Check out our new tampon ghost project!

Don’t like wearing tampons?  I’m pretty sure you could do something similar with this.  It has wings which could resemble ghostly arms!

If you can’t get enough of making things out of tampons, you’re in luck.  Here’s a web-site devoted to the art.  Thanks internet!  tamponcrafts

Let’s close out this Halloween love fest with a modern classic, shall we?  Werewolf Barmitzvah, anyone?