I’m addicted to magazines.  Sure, my love for reading goes beyond periodicals– I love reading anything and everything–comics, fiction, non-fiction, newspapers, websites, the backs of shampoo bottles… but there’s something special about magazines.  Maybe it’s the glossy pictures, maybe it’s the perfect for a short-attention span articles, or maybe it’s just how easily they travel.  Nothing like unfurling a new magazine to read on a long journey.  I’m not exaggerating when I say that one of the hardest parts of moving over to the UK was acknowledging that my precious weekly Friday ritual of coming home from work to a new Entertainment Weekly in my mailbox was at an end.  It’s pathetic but true.  Don’t judge me too harshly.  I’m a creature of comfort and they don’t have anything similar over here.  Sure, they have gossip rags and a couple of film monthlies–it’s not The Moon…but there’s nothing like EW with its easy to digest pop culture news and insightful commentary.  Sometimes I go to the website just to see what the cover is for the week.

It hurts that much more if it's either a comic book focus OR a Tina Fey cover.

I’ve been this way as long as I can remember.  My Mom helped fuel my lifelong addiction by not only letting me purchase The Muppet Magazine whenever I saw it in the store, but by signing me up for no fewer than four subscriptions BEFORE I hit the age of ten.  Every month, an issue of Penny Power, Highlights for Children, Zoobooks, and today’s great thing:

Technically, I didn’t get Cricket every month as it’s only published nine times a year.  But, close enough.  Now, I don’t want to assume that everyone out there is familiar with Cricket.  Not everyone had a first grade teacher for a Mom.  You may not have been privy to the wide selection of periodicals available for the under 13 set, so let me tell you all about Cricket. It’s a literature magazine for kids.  It was started up in 1973 by a woman (Marianne Carus) who wanted to market something like The New Yorker but for the swingset-set.

They’d usually come up with a theme for the issue and then fill it with the best short stories, poems, art, and non-fiction that they could.  They’d draw some pretty big names too:  Eric Carle, Ursula K.  Le Guin, Tomie dePaola, William Saroyan…

She pretty much hit the bullseye…especially when it comes to the cover style.  Just as The New Yorker is revered for its cutting edge and highly inspired cover-art, check out some previous Cricket covers.  They too, would reflect the theme of the issue: 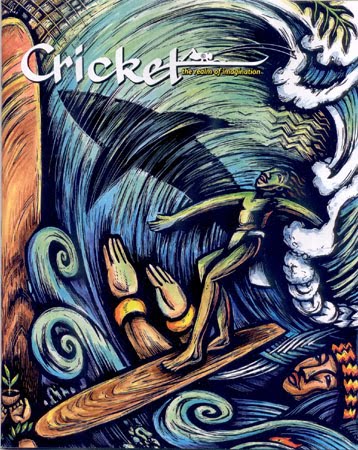 Not gonna lie…lots of the sophistication was wasted on me.  I didn’t read Cricket cover to cover like I did with some magazines.  Even with Penny Power, I’d read most of it.  Penny Power was like Consumer Reports but for kids.  I used to love reading the letters from other readers that explained how they successfully complained to companies about melted popsicles and action figures that broke when you threw them too hard against the wall.  It really instilled a ‘the squeaky wheel gets the grease” mentality in me that impresses so many of my stiff upper lip non-complaining type British friends.  But with Cricket, I’d flip and only stop on stories and artwork that caught my eye.  If it didn’t hook me, I wouldn’t bother.  But to be fair, the magazine was pretty dense with options.  They really tried to get something for everyone in each issue.  It’s only now that I truly appreciate the richness of this publication.  And like how wooden blocks and ‘learning’ toys, were foisted on me in the sunny days of my childhood, I’m going to foist this magazine onto my nieces when the time comes.  What goes around comes around, girls.  You’ll thank me later.

Also, it should be noted that as an adult, I don’t exactly read The New Yorker cover to cover either.  So, I may never learn the true joy of expanding my knowledge–or paying attention to items that I’m not interested in already.  However, one thing I never ignored was the delightful comic-strip continuity of the bug-world.  You know me, I love me my comic strips.

The following quote is from a highly useful article I found when researching today’s topic.  It explains the history of The Caruses–Marianne and her husband Blouke Carus first ventured into the world of publishing by attempting to one-up the boring” Dick and Jane” style reading primers by producing what they deemed as  more interesting texts.  They created the Open Court textbook line, that they hoped would keep children interested in reading.

“Perhaps Cricket‘s greatest appeal rests with the band of irrepressible insect cartoon characters—the result of absent-minded doodling by illustrator Trina Schart Hyman during planning meetings for the prospective magazine—who crop up in the margins to define exotic vocabulary or merely perpetrate good-natured mayhem among themselves. One of the characters is an ant named “Aunt Marianne.”

Caldecott Award winner Trina Schart Hyman gets an A+ from me not only for her awesome creations but for surviving childhood with not only the name Schart attached to her, but also the name Hyman.  The interaction between serious-minded good-guy Cricket and chocolate chip cookie-scoffing goofball Ladybug is to die for.  She’s the Ernie to Cricket’s Bert…the Homer to his Marge…the Goofus to his Gallant.  I think, even as a youngster, I really appreciated the comical character being a female for once instead of being the straightman…as it were.  Anyway, here’s the gang:

Another feature that I like about Cricket is that there’s no advertising.  This makes it less likely that you come away from the experience wanting crappy toys or anything.  Although it DID ruin the lives of several insects in my backyard.  So many caterpillars caught and accidentally destroyed.  Soz to all of those almost-butterflys that I played with until they died.  I didn’t mean it.

Of course, after your teen years, you need a steady diet of Newsweek, The New Yorker, and EW. An old copy of The Muppet Magazine never hurts either…