The Old Man and the Fleabag

Recently, I received a worthy forward.  It was a video compilation of reporters eating it.  It’s very funny…though for a few of these clips, I was left a bit anxious…wondering if the reporter featured was actually physically alright afterwards.  Have a look and try not to cringe too much.

There are a few clips that really get me on that reel.  I love the inappropriate “Ohio State!” lady.  I love the angry woman that wallops the reporter with her purse and challenges him to “put that on the news!”.  But, most of all, I love that blustery old codger trying to shoo away that dog.

I obsessed over this clip for a good week at my day job–watching it sometimes five times in a row.  It stuck in my head so much that I was even driven to learn more of how/why/and where this incident occurred.  Here’s an extended version of the incident in question.  It answered some of my questions.  The dog shouter-er in question is Bert Case of Jacksonville MS:

It gets me every time.  This guy does exactly what you’re not supposed to do when confronted with a snarling dog.  He’s so grumpy old-cootish, I love it!  I keep waiting for him to sputter ‘get outta here you pesky varmint!  Dagnabbit!” and let off some six shooters.  I’ve memorized his choreography and now bust it out sometimes at work in random scenarios–like if someone comes to my desk with post for me.  Admittedly, it’s pretty obnoxious to do something like that if the person doesn’t get the reference but…feh…I just can’t help myself.

The triumphant “You go!” at the end is a cherry on top of this man vs dog sundae.  Watch him look over to the camera man at that point for his/or her approval.  Bert, you are a viking among newsmen.

I’m also just plain smitten by that dog.  Look how full of glee it is at it nips at the old man’s heels.  Life is a game.  This dog relishes misbehaving.   It reminds me of any attempt to try and discipline my sister’s dog. 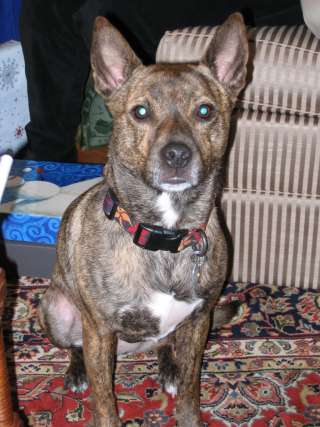 The Brown in question...

Brown would do something awful, like take a poo in the middle of the room and you’d use your sternest voice to say ‘Bad dog.  Bad.  No!’ and Brown would just put her fuzzy face into happy dog smile and bow right into play pose and dart around the room as if your tirade were an invitation to play some stupid dog game.  Incredibly frustrating from a training point of view, but also hilarious.  Hey, she’s not my dog even if I did help pick her out.

Anyway, I thought it only fair that if Bert Case, the reporter in this clip, gets a profile on a website, the dog should also get equal representation.  After all, a dramatic scene requires two players and this dog should get credit where it’s due.  So, I wrote one for him.

Here’s Bert’s first.  If you click on this link you’ll see a nice snap of him and learn that he’s an experienced field reporter, anchor, and news director for WLBT 3 out of Jackson, Mississippi.  :

And now, for the real star of the scene:

Ruggles, 5, has been a resident of Jackson, Mississippi for three years–previously occupying a dog house in a backyard in nearby Biloxi.   For three years running, he has been celebrated locally for treeing the most neighborhood cats–11 per week at last count.

Ruggles has built a solid reputation for independence and bravery.  This can be seen in his daily actions wether it be courageously and brazenly  whizzing on Mr. Atkinson’s prize begonias or for not coming when he’s called.

Ruggles has earned the wary respect of local residents for successfully chasing away more delivery men than any other neighborhood dog–ensuring that nobody gets packages or pizzas in a timely manner.  Since taking residence in the area, Ruggles has made it his priority to be more brown and stripey and barky than any dog in the immediate vicinity.