In keeping with my eager anticipation of Halloween, I’d like to celebrate a fantastic performance in a ‘pretty good’ movie.

51. Anjelica Huston in The Witches

The film,though it received mixed reviews, isn’t a bad one. Its director, Nicholas Roeg and the Jim Henson Workshop succeed in capturing some of the magic. It’s just that the source material is THAT good that any filmed adaptation is unlikely to compare. Roald Dahl’s book The Witches (and frankly, any book that he writes) rewards the reader with an experience that is magnificently ludicrous. Dahl’s carefully selected language is key here. Though his plots and story-lines are terrific, you can’t beat him for best use of a thesaurus applied to children’s literature.

Couple Dahl’s words with Quentin Blake’s beautifully grotesque scratchings and you have a formula that, try as it might, the medium of film just can’t capture. 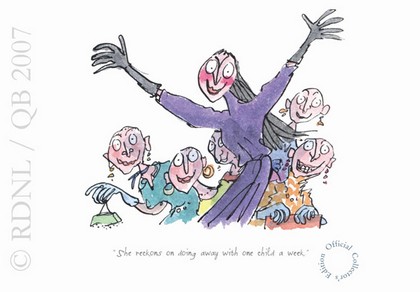 Not ALL English women look like this. Only lots of them.

On top of having fantastic (if impossible to replicate source material) and a director of of good reputation (Roeg’s film Don’t Look Now is on several ‘best of…’ lists), the picture has a stellar supporting cast including Jane Horrocks, Mr. Bean, and Brenda Blethyn. Noble efforts all around but the real savior of this picture is Anjelica Huston.

In fact, though Dahl was allegedly pretty miffed at some of the changes the film made to his story–like the ending for a start–he was delighted with Huston as The Grand High Witch. In fact, she was his number one choice from the get go. As irritating as it must have been to see his deliciously grisly fairy-tale get watered down for the cinema, he must have been over the moon when he watched her performance. I mean, she’s a great actress, we all know that, but who knew how camp she would go for her turn in this pic?

For, that’s kind of what Dahl’s villainesses are in a way–camp…super-campy drag queens…and that includes Matilda’s Miss Trunchbull. Dahl elevates ugliness to a real art form and there is nothing more exciting than watching a beautiful person get down and dirty. Huston with her regal appearance and high-art pedigree totally goes for broke in her portrayal of the worst witch of them all. Everything, from her total loathing of children to her bizarre accent are pitch perfect.

I applaud her for suffering through eight hours of makeup in order to go from this:

To this, The Grand High Witch, otherwise known as Eva Ernst:

That’s pretty much what I look like after eight hours of makeup as well. Except, for me, it’s an improvement.

It was speculated in an issue of Buzzline magazine that Anjelica can play these types of characters better perhaps because she doesn’t have children. Where some other actress would’ve been afraid to offend, she’s more objective about the humor in the movie–thinks kids can take the laugh. She’s absolutely right. Why else would Dahl be so revered by the 10 year old set?

Here’s a clip from the film. It’s a bit long but it’s a good one. Watch at the five minute mark how she can barely contain her excitement over the prospect of turning Bruno into a rodent.

Superb! I especially enjoy the slight change in her vocal quality when she gets a bit embarrassed at the overwhelmingly positive reaction to her new forumla. “Shaddap, shaddap. Enuff!”, she says bashfully.

Beautiful, talented, with fantastic taste in children’s literature? What more could you ask for? What’s that? And she shares some of my political beliefs? That’s it. She’s officially one of the most awesome people alive.

Actress Anjelica Huston has become the latest star to take aim at U.S. vice-presidential candidate Sarah Palin, stating the fact the Alaskan Governor is even in the race for the White House is “depressing”.

The Witches star admits she’s “terrified by the politics of Mrs. Palin” and disturbed by her love of hunting.

Huston states, “This is a woman who is shooting caribou from the air, from helicopters. It’s like going back in time to some kind of fantasy of the 1950s, and I find it very depressing.

And to think, they almost cast Cher as The Grand High Witch. For real! I’m not trying to poop on Cher’s acting ability or anything, but it just wouldn’t have been the same. Anjelica was the right choice for this “Dark Lady”.

Next up for Anjelica, is an animated version of another Roald Dahl classic, The Fantastic Mr. Fox. It’s being directed by another Anjelica Huston fan, Wes Anderson. I bet she’ll take the cake in this adaptation as well.