May The Best (Wo)man Win

I’ve had a bit of a vacation from television since the end of the first seasons of “Mad Men” and “Dexter” (though these are old news in The States, Britain has just aired them…alright?). But, the other day, my girlfriend tuned into BBC’s newest celeb competition show “Maestro”. I heard the constant starting and stopping of Prokofiev’s “Romeo and Juliet” from behind my computer monitor and went in to investigate what the hell she was watching. We’re both hooked now. The premise is this: 8 celebrities (except for Starsky and Hutch’s David Soul, most are unknown to Yankees but treasured in Britain) who all profess to be classical music enthusiasts, try their hands at conducting the London Symphony Orchestra. I love her anyway, but the best thing on this show is number Great Thing:

I’m not trying to make a massive feminist statement or anything with my title to this blog entry.  It’s just a fact…there aren’t a lot of female conductors out there.  Google search ‘female conductors’ and you’ll come up with all sorts of articles about how few there are out there and why that might be.  Whatever.  The good news is that so far, the women of “Maestro” are excelling and I think the best of that bunch is Sue.

A bit about Sue.  She was educated at Cambridge and whilst there, performed with their legendary comedy troupe, Footlights. She gave stand-up a go, on a dare and was swiftly approached by Mel Giedroyc who, with Sue in tow, formed the comedy duo Mel and Sue. The two both wrote for the other big British female comedy team, French and Saunders. Since then, she’s been a television and radio commentator and has taken to doing the occasional stand-up spot again. To me, she seems like the closest thing Britain has to Ellen Degeneres. Both are somewhat androgynous but stylish lesbian comics who clearly have sneaker fetishes. 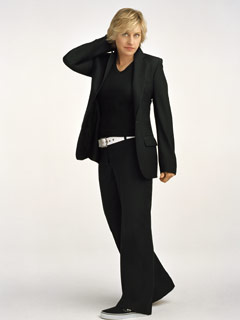 “Maestro”, according to Sue, is not truly a reality show as it doesn’t reflect anything that typically happens in ‘real life’.  It’s more hyper-reality. I think it’s a valid point.  Most people in their daily reality don’t get to win a shot at conducting a world class orchestra.  A shitty orchestra maybe…but never a world class one.  Here’s the BBC website for the program: Maestro

Like most of the contestants–and to be fair, like most of the people in existence–I don’t really understand what a conductor does. I’ve kind’ve assumed that if you’re good enough to play with a symphony orchestra, you’re probably good enough to read the piece of music that’s sitting in front of you. Music sheets already come pre-programmed with time, tempo, and a range of dynamics from piano to forte. Put everyone in a room together, practice it a few times, and you’ll probably sound pretty good. That’s why these people study music for ages, right? So they can do this? Looking at what a conductor does…he just kind of looks like a figurehead to me. An egghead that kind of vogues along to the beat.

We soon learn though, that the symphony really does take its cues from that figurehead. Even though the music sheet might say one thing…if the fearless leader wants it to go faster, louder, softer, slower, zazzier, whatever, he can do that. Take a look at someone doing it wrong-ish and you’ll see what I mean.  This is Peter Snow, a newsreader, giving it a whack:

I’m not the only one who favors Sue. The judges, so far, seem to love her. They also love drum and bass DJ Goldie.  His talent for the stuff is surprising as it seems to come quite naturally to him even though he admits to not being able to read music.. But, there’s an inability for him to accept judge’s criticism gracefully. I hate that. It’s like when Justin Guarini mouthed off to Simon Cowell. An unlikeable action was his ultimate death knell. Sue, on the other hand is self-effacing and goofy as well as talented. A winning trifecta.

Last week’s theme for the competition was ‘the movies’. The producers sent word of their picks for each contestant. Look at her reaction to getting “The Simpsons” theme song. It’s adorably enthusiastic.

She also does a kickass job with it. Who knew it was such a difficult piece? Danny Elfman is genius.

As a final thought, I think I prefer the floppy hair Sue but apparently, her mentor has made her pin it back into the pompadour fashion that you just witnessed in the video clip, so that she might engage the orchestra more with better eye contact. Supposedly he’s trying to coax her fashion glasses away as well…  Here’s an enjoyable little editorial that she wrote for The Guardian newspaper that states as much. Guardian Piece Start the petition now…Save Sue’s Glasses!