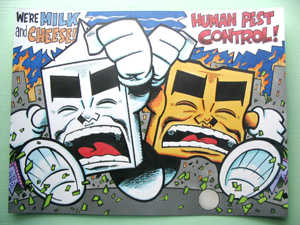 Dairy products, like most things are best enjoyed in moderation.  This is something that writer and illustrator Evan Dorkin probably knew when he created the absolutely mad comic strip/book Milk and Cheese.

After all, there have only been seven issues of the comic book to date to be released.  But, to abuse another cliche, all good things come to those who wait.

Brooklyn born Dorkin, which is a just such a fantastic name for a comic nerd, started doodling the characters onto cocktail napkins (seems to be the genesis for so many valuable contributions of society) back in the 1980’s. 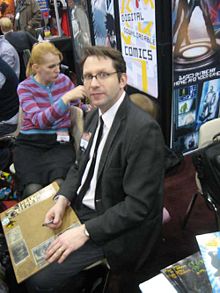 knows that less is more...

Actually, the character of “Cheese” was born as kind of an in-joke. It was a scribble that he kept taunting his friends with until Cheese was joined by Milk with beer bottles in hand and an underground comic strip was born.  (It should be noted that typically, it’s gin that fuels their violent sprees).

Right about now, you’re probably completely lost.  Sorry.  I really should have explained this straight out of the gate.  Milk and Cheese are the two temperamental protagonists in the comic strip Milk and Cheese.  They are ‘dairy products gone bad’ and their brief and blood-soaked adventures are also collected in comic book form.   Published by Slave Labor Graphics, only 7 issues currently exist but they’re definitely worth seeking out.  You can kill about half of them by picking up the trade paperback Fun With Milk and Cheesewhich collects issues #1-4.  A near mint first printing of issue number one will set you back 100 smackers anyway.  That’s a lot of cheese!  (Sorry)  To give you an example of the mayhem that the ‘carton of hate’ and ‘wedge of spite’ provide, here’s a splash page from one of the comics.  To offer some–probably unnecessary–exposition, the two have descended upon a ‘furry’ convention.  Furries are adults who like to wear animal mascot-type full body costumes.  It verges into fetish territory. 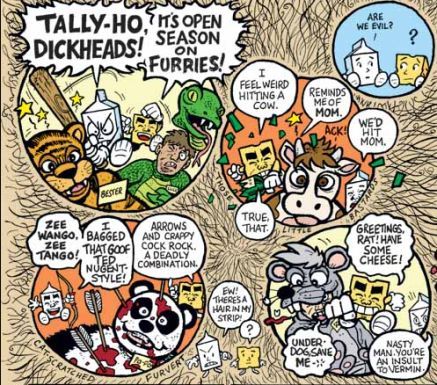 I should mention at this point that, obviously all these images are trademarked to Evan Dorkin and his House of Fun.

It’s not just the fringe members of society (like furries) that take a beating.  Pretty much everyone has been shredded in the pages of Milk and Cheese from stand-up comedians to street performers to “Star Wars” fans.  I think those three groupings alone cover every single person alive today.  Some people might belong to all three categories.  I do.

In published form, the duo first appeared in a Washington DC area music and culture mag called Greed.  Evan Dorkin has since moved on to writing for mainstream comics publishers as well as television series like “Space Ghost:  Coast to Coast” and the most recent Superman cartoon.  Speaking of cartoons, though there have been offers made, Dorkin hasn’t jumped at the chance to animate his star characters (though he has created other animated offerings–like “Welcome to Eltingville”, which was based on his experiences working at a comic book store).  Why no Milk and Cheese cartoon?  Apparently, he doesn’t think they’d survive the jump.  He might be right.  There’s something about the two bursting out of the illustrated comic book panel that elevate the sadistic comedy of it all.  Any attempt at a cartoon would probably be both watered down and too much at the same time.  Small and fortified doses is how Milk and Cheese work best.

That’s not to say, however, that there’s not some completely bitchin’ merchandise out there.  Check this: 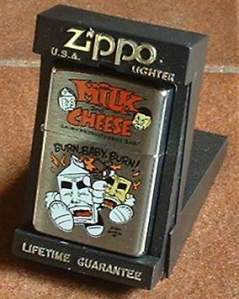 Even if it might not make a good cartoon, I think it’d make an excellent video game.  A good old-fashioned side-scrolling martial arts game a’la “Double Dragon” style–with the option of course, for two players to play simultaneously.

To wrap up this gush fest, here’s a panel Dorkin created after Bush ‘won’ in 2004: 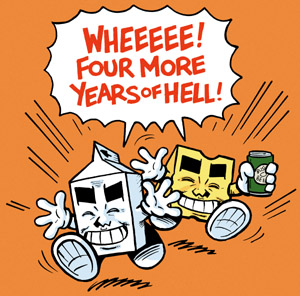