You know how frustrating it is when you get an itch you can’t scratch?  In a similar way, do you ever have a craving for food this is absolutely unattainable from where you are?  It sucks.  Sometimes–quite often, actually, I find myself craving a good slice of pizza (Britain’s isn’t the best) and I can’t have it because it doesn’t exist where I am.  I sure as hell can’t make it the same way that a pizza kitchen in NYC could.  There is no hope.  All I can do is allow the saliva to pool in my mouth as the mental image stimulates my maw-glands.  Unsatisfying.

Sometimes I crave the dill salad dressing from Veselka.

That dressing is the best.  I swear, I think about it, and I get a phantom tangy sensation in my mouth.  I’ve never been a salad eater, but I’d eat a whole bag of spinach if it were covered in that stuff.

Veselka is a Ukrainian diner in New York’s grimy but trendy East Village neighborhood.  Contrary to the images that that previous sentence might bring to mind, Veselka is a bright, clean, airy, high-ceilinged corner restaurant with loads of windows, outdoor dining and great people-watching.  The service ain’t so great but it’s at least authentic.  That’s kind of part of the charm anyway.  It runs from grumpy but efficient to sloppy and overly apologetic (these tend to be the recent immigrants who think that you’re going to turn them over to the INS if they don’t bring you your pancakes fast enough).

I think one of my favorite encounters with a waitress at Veselka was back when I was University.  It went like this:

My friend Ari’s cousin, Sam, was in town for a spell.  We went over to visit Sam and after smoking a lot of weed, he decided that we should all go find something to eat.  Veselka, which should be used to catering to the needs of East Village stoners, sounded like the best option.  They’re cheap, open 24 hours, and serve breakfast all day.  Anyway, after reading the menu over, oh about a dozen times, Sam calls the plump middle-aged waitress over to ask her for some recommendations.  In his gruff South Jersey accent he says, “So, uh…are these here sauerkraut pirogies any good”?  After considering the question, she responds in her very thick Ukrainian accent, with the most sensible possible answer, “Vell…if you like sauerkraut…”.  Ari and Sam, still in a pot-haze, started laughing so hard that the tears were streaming down their faces.  To this day, we still answer each others questions with, “Vell…if you like sauerkraut…”.

Veselka also is a place that provided me with shelter for eight hours one night.  I was due to move into an apartment share one day and the girl that should’ve been moved out of my space already, wasn’t.  None of her crap was even packed yet and the place looked like a disaster.  There wasn’t even space for me to throw a pillow down to sleep.  I was back from summer vacation early and none of my friends had moved back to the city yet.  So, I was essentially homeless for the night.  I had enough money to afford a cup of coffee and a danish at Veselka.  So, with Margaret Atwood’s latest in hand, I stayed there from midnight until the sun came up.  Most places would hassle you out after a few hours of not buying anything but not Veselka.  They just kept the coffee coming and left me alone. 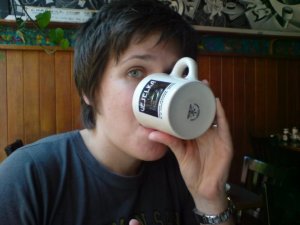 This time, not homeless.

Veselka (which means ‘rainbow’) has been serving delicious and cheap food for over 54 years. It was opened by Ukrainians who fled to America during WWII.  The East Village, which had quite an influx of Eastern Europeans at the time, was the perfect place to establish this restaurant, newsstand, and meeting ground.  The website gives a whole rundown on the history of the joint.   Veselka

Take a look at the menu when you check it out.  It’s pretty impressive but what’s even better is that they do most of the food pretty well.  You  know how some menus overshoot their mark…  Still, I usually skip the American-style offerings when there and stick to pirogies–which come in oodles of varieties like sweet potato, regular potato, the aforementioned sauerkraut, farmer’s cheese, and always a couple seasonal ones too like pumpkin or something.  I also love the vegetable combo platter.  You get pirogies, a mushroom and kasha stuffed cabbage, soup, salad, and two slices of challah.  Their challah is cheavenly.  It’s almost like poundcake in its density.  The ginormous selection of veggie food also means I can drag my vegan friends there when we’re hungover. 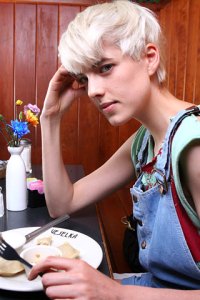 In a pleasing bit of symmetry, though they’ve lost a customer in my move to Manchester, this Mancunian supermodel–Agyness Deyn (pictured)–lives in NYC now and eats at Veselka, like every frickin’ day.  So you lose one to Mancheseter you gain one from Manchester.  Still on top, Veselka!

Writing this entry today has made me really crave this stuff.  I think I’ll go check travelocity for cheap fares.