Those of you here in Britain will undoubtedly be familiar with our eleventh great thing:

Sometimes, an advertisement comes along that, really, has little to do with the product but is succesful because it is, in itself, a memorable little work of art.  This is definitely one of those ads.  It’s entirely weird and delightful.   My favorite bit is when the rockstar/gorilla cracks his neck joints before the beat kicks in.  Watch here, and then we’ll discuss!

This is the type of commercial that catches you off guard initially, but then you find yourself hoping that it’ll come on during whatever program you happen to be watching.   This campaign, created by Fallon in London, was a giant leap away from traditional advertising with the intent on making ‘entertainment pieces’ that would have a greater success with word-of-mouth and viral marketing.  I don’t nothin’ about that industry mumbo-jumbo but I do know that watching Gorillas rock out on Phil Collins’ songs makes me want to chomp on chocolate bars real good!

What I love, is that the creators are obviously intelligent enough to follow the golden rule that comic books stumbled on eons ago.  “Everything is better with monkeys”.  If you’ve got something that’s sorta good, but you want to make it great, add an ape!  Superdickery.com expounds on this theory greatly.  Here is one of the many comic covers (enhanced by the presence of apes) that made it into their galleries. 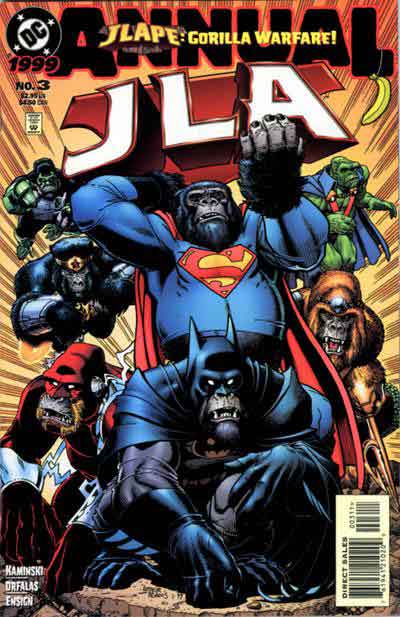 as I was saying...comics are a serious form of...oh, dammit DC! Stop undermining my arguments.

The actor in the Cadbury’s ad, Garon Michael, has played a gorilla on at least three other occasions:  once in “Congo”, once in “Planet of The Apes” (the Tim Burton one, I’m fairly sure), and once in “Instinct”.  One thing I’ve learned since starting this blog is that if you play a gorilla once, the opportunities (for gorilla-mimicry at least) come rollin’ in.  (See the Princess Mombi blog).    To give credit where credit is due, most of the facial movements were done by remote control puppeteers.  So, the studly guy below can’t quite hog all the glory. 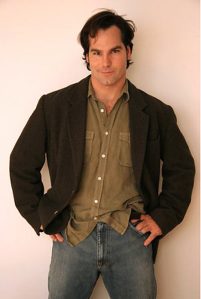 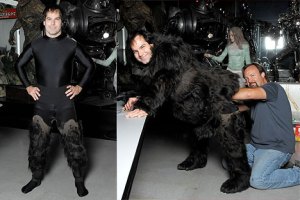 Exercise caution when tempted to do this to a real gorilla!

The ad is high concept but relatively clean and bright and joyful, which is pretty much what the makers were going for.   I dare say, it’s almost a bit Wonka-ish in its revelry of the ridiculous.   Naturally, it was favorably received and the parodies and knock-offs soon followed.  You can find tons of these on Youtube, of course.

Personally, I think the follow-up ad, this one here about airline vehicles that are pimped out and using the midnight hour for some fast and furious style racing, is a lot less joyful…which is bizarre because Queen is sooooo much better than Phil Collins.  I don’t think anyone could have predicted that.

Perhaps this is further evidence that anthropomorphic monkeys are better than trucks.  Take that, Transformers!