I love dogs.  I can’t wait until I’m in a property where I can have one.  I haven’t been a pet-owner since before my college years.

I know it’s a bit sadistic, but one of the best reasons to have a dog, versus the more dignified cat, is that it’s a pet you can laugh with and at.  Dogs are just intrinsically funny in both their shamelessness and non-discriminating sensibilities.  They’ll eat ANYTHING off the floor and be happy about it.  They really don’t need a thing to boost their comedic value.  But, put a dog in clothing?  The funny rockets off the scales.  Be it tee-shirt, hat, or Halloween costume (around October maybe I’ll treat us all to a list of pugs in bee outfits) add a human clothing element to any dog and you can just about guarantee that laughs will follow.

The most pee-inducing experience I’ve had with this phenomenon to date is probably when I got my sister’s dog, Brown, some boots for Christmas.  That’s why today’s great thing is:

I used to work at a bit of a recherche dog boutique on the Upper East Side of Manhattan.  I learned a lot about dog accessories and used to roll my eyes at the customers that would come in and drop $100 on a dog sweater.  I mean…yes, by all means, protect your short-haired dog from the harsh NYC winters, but $100?!  Come on, man.  The other dogs are just going to make fun of it anyway.  But, I considered dog boots to be slightly different.  They’re much more utilitarian than a fancy sweater or a dog coat that’s been designed by Jay-Z.  They served a greater purpose for the urban hound.  You see, when a dog gets its walking on sidewalks and paved surfaces, it can damage their paws.  They’re always throwing down all sorts of coarse salt in winter and it gets up in the cracks between the pads and can lead to irritation.  So, it seemed like a nice thing to equip your city-dog with.

Brown lives in town (yay rhymes!) and gets her daily strolls on the side-walk.  So, last year, I brought home these: 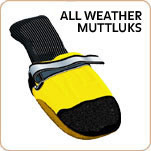 The website was adorable and the reviews from sources such as ‘the jury of Polartec’ and ‘The Walking Magazine’ seemed outrageously positive.

I was in no way prepared, though, for the hilarity that followed.  I really should have watched some footage of dogs trying to walk in them first.  Enjoy these clips:

Brown was lounging on my sister’s bed when I approached her with the boots.  She wasn’t really bothered much about me putting them on her and there wasn’t much funny about it yet.  Just me velcroing canvas boots onto a dog…nothing funny about that.  The hilarity started when she tried to get up and jump off the bed.  Oh man…I wish I had the vocabulary to accurately describe the gawky flailing and comforter snagging that ensued.  Poor Brown’s ears were folded back against her head–mortified in her embarrassment, but I’m not that sensitive, I was on the floor.

After pulling myself together, I managed to get Brown down the stairs and onto the snowy sidewalks.  We lasted about a block before she had freed herself from her new shoes.  My sister and brother-in-law, as far as I know, have not kept up the dog boot regimen and are leaving Brown with her paws full of salt but her self respect intact.

Isn't having to wear an orange harness bad enough?

Perhaps I should bring home a different model.  I kind of fancy the look of these thigh-highs for dogs:

Or maybe this more ‘Napolean Dynamite’ style of doggie moon-boots.

At any rate.  If I do bring home a new pair this year, I hope my sister and brother-in-law don’t give up on it.  Apparently, the dog just needs to get used to them and they’ll start moving in a more dog-like fashion again.

Plus, it’s usually around the holidays that I need a good laugh.

3 responses to “Well-intentioned and hilarious cruelty…”