I’ve had a sort of disdain for Elmo since his mid-nineties rise to glory.  Yes he’s cute and occasionally entertaining but it’s thanks to that red-headed stepchild that we hardly ever see timeworn favorites Snuffy, Cookie Monster or Grover anymore (let alone his secret identity, Super Grover).  Though Elmo is the biggest air-hog, these sentiments echo for all of the new Muppets and their ilk.  I’m talking to you, Abby Cadabby, Clifford, and  Zoe Monster!  I think I could make a pretty sweeping generalization for old school vs. new school Muppet if it weren’t for our number 6 great, great, great thing–

Pepe first appeared on the show “Muppets Tonight” in 1996.  Since then, he’s been used in television, commercials, and for other promotional purposes.  Since then, he has definitely worked his way into my top 3 Muppets (everyone should have that list worked out…just in case).  Pepe works as a comedic character for several reasons:

-He speaks with a Spanish accent (funny sounding)

It’s clear that the Muppeteer that operates Pepe is a gifted improviser.  Bill Baretta’s performance is heavily influenced, apparently, by his thickly accented mother-in-law.  Most sentences are concluded with ‘OK’?  As in, “I’m going to buy this cauliflower OK?  I don’t have enough money so you give me some, OK?”  My typing really doesn’t do it justice, so you’ll have to watch some of the clips at the end of this blog entry.

Most often, Pepe is depicted as an unsuccessful Lothario.  Whether he succeeds or not in charming the girl matters very little to him as his high self-opinion will remain the same.  He’s also a highly motivated Hollywood social climber.  He’s given celebrity interviews on the red carpet and reviewed DVDs for the award winning web show “Statler and Waldorf: From The Balcony”.  I’m dying to see his interview with Jodie Foster, so if anyone knows of any good links, please share!

The first time I saw Pepe was opposite the magnificent Joan Cusack in A Very Merry Muppet Christmas.  She was playing a sadistic banker and developer, Rachel Bitterman, who Pepe, seduced by her wiles, temporarily works for. 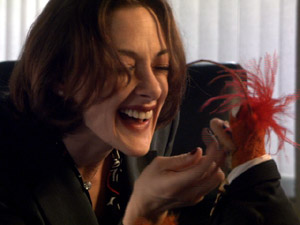 He calls her ‘sexy banker lady’ and ‘bitter-buns’.  Anybody that can stand up (or be propped up with sticks) next to Joan Cusack and get laughs deserves some credit.  Cuz that lady, she is funny!

With Jason Segal (writer and star of Forgetting Sarah Marshall) penning the next Muppet movie, there is definitely some future Pepe potential.  I really hope that he recognizes Pepe’s value and utilizes him for some of the action.  Being a fan of the old school, I also hope to see some Lew Zealand and Swedish Chef, but Pepino Rodrigo Serrano Gonzales definitely deserves to make the cut.

The clip below is a fairly long montage of Pepe at his best, but it’s worth watching if you have the time–even just for the first few minutes to get the general gist of what I’ve really failed to describe.