‘Return to Oz’ came out when I was nine.  It’s one of several family oriented ‘fantasty’ films that disturbed the bejeezus out of me and as such have a fond place in my heart.  It keeps company with “Labyrinth”, “The Dark Crystal” and “Swamp Thing” (I dunno, was that one family-oriented or was my baby-sitter just negligent in letting me watch it?  Anyway, I saw it when I was young.  Scary).

Starring a young Fairuza Balk, “Return To Oz”  was kind of a mash-up of a few of the books in the “Oz” library.  I don’t know how faithful they are to the source material nor do I particularly care.  This movie rocks.  The best thing about it?  Tough to decide but it’s gotta be….

Forget the Nome King.  Forget The Wheelers…O.K. actually don’t forget them, they were pretty awesome too–(chillingly described as ‘humanoids with wheels instead of hands and feet’).  Look at them!!!

As an interesting side note, most of the guys that played Wheelers have a background in puppetry and movement.  Check out this guy’s resume on IMDB:

He (Peter Elliot) has played a gorilla DOZENS of times.  Seriously, look how many of his credits are ‘gorilla’.   He must be pretty good at it now.  He even plays Bollo on “The Mighty Boosh”.  Good work, if you can get it.

But, back to the real object of affection for today’s blog, Princess Mombi.  In actuality, Return to Oz’s Mombi is based on two characters, Mombi–a sorceress mentioned in several of the “Oz” books and Princess Langwidere–the vain, head fickle monarch of Ozma of Oz.   What can I tell you about her:

…she has an army of creepy Wheelers at her disposal

…she has the rightful heir to Oz imprisoned in a mirror

The thing about it though…as scary and villainous as Princess Mombi is…wouldn’t it be cool to have interchangeable heads?  Really, a new face for every day of the month.  Think of the benefits!  You could, lash out at the world one day, I mean really let it all out, kick something, punch a guy in the mouth, really vent and then just never ever wear that head again.  No retribution!  You could coordinate heads with different outfits.  You could certainly keep things lively in the bedroom.

Right now I have extremely awkward ‘growing out phase’ type hairstyle.  I also have Mt. Zitmore on my chin.  What I wouldn’t do for a second head let alone 30 backup heads.

Props to British actress Jean Marsh (who after this role played the evil queen in “Willow”). 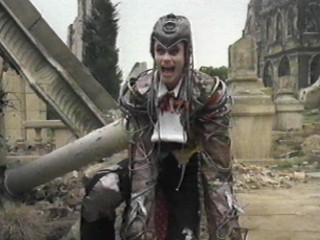 Nice HEADshot. Get it?

This fun trip down memory lane has really reinforced the need to go out and buy this film on DVD.  It’s shocking that I don’t own it yet, really.

For further scares, please check out this fun link.  It’s all 31 heads on display for you.  The fact that this gallery exists on the Internet pleases me greatly.