Pizza must be the most perfect food ever devised.  It can satisfy vegans, omnivores, and big fat slobs alike.   It has the potential to capture as many or as few of the food groups as you wish…depending on the toppings you order.  It combines multiple textures in each bite.  It can be enjoyed hot or cold and I could eat it at any point in the day.  It’s even OK when it’s not great.  But, when it’s good it is divine.  It is truly the ambrosia of street-food.  100% of Teenage Mutant Ninja Turtles can’t be wrong.

Splinter better get in there if he wants a piece.

That is why pizza is today’s great thing:

Though I’m writing in a sort of general sense about the theme of pizza, a very deep well indeed, the reason that I feel so sparked to do this today specifically is because I just uploaded some pictures from my recent trip to NYC onto my Facebook page.  In that collection was a pic of a slice I had from a hole in the wall called Artichoke on 14th Street between 1st and 2nd Ave.  It was the best piece of pizza I’ve ever had in my life, I believe, and even thinking about it now floods my mouth with saliva.  Disgusting, digestion-prepping saliva.  Before I go into mouth-drenching depth about what this slice was like, let’s discuss OTHER types of pizza that are out there.

First, let’s talk about chain restaurant pizza.  You’ve got Domino’s, Little Caesar’s, Papa John’s, California Pizza Kitchen, and Pizza Hut to name a few.  Now, I’m not one of those haters that’s gonna  proclaim all of these joints as awful.  They serve a need, I suppose.  Their efforts may not be the result of a loving hand, but as I mentioned earlier, even pizza that’s just OK is a treat.  Out of all these national and international pizza-shillers, I’d actually say that I’m most a fan of the HUT!  This is, of course, because it is probably one of the worst of the chain pizzas, fat and calorie-wise.  The magic is in their pan pizza formula– which essentially creates a deep fat fried pizza, since it’s being cooked not simply on an oven tray but in a pan with larded sides.  Superb and deadly.

One thing that used to annoy me about the Personal Pan Pizza, however, is that they would tuck the pepperoni under the cheese.  It is my opinion, that the pepperoni should be on TOP of the cheese, allowing the heat to curl the sulfite-riddled pork disc up to a crispy, penny-sized topping.  If it’s left to its own devices UNDER the cheese, it will never achieve this beautiful second life.

Pizza Hut leaves its mark wherever it lives.  Not just because it increases the average local person’s BMI, but because if a branch should ever go out of business and become say–a used book store…or a burrito joint–it will NEVER stop looking like a Pizza Hut.  Its unique structure–its husk– is the shell husk for hermit-crab business to crawl into.

On the other hand, they can’t really compete with the unique deliciousness on offer from locally owned pizzerias.  By ordering from the local joints, you’re also supporting family businesses…I’d like a large pizza with green peppers, jalapenos, and self-righteousness.

Most of the local places near where I grew up in Erie offered a sort of puffy-crusted, stodgy great-lakes style pie.  I imagine that this is what MOST pizzas are like across America, allowing for some taste-variations with types of topping, differences in ingredients used, sauce-to-cheese ratio, how local water supply can taint the flavour of the crust, etc…  Personal favourites of mine in Erie included Barbados, who also made top quality subs, and Mr. Pizza—purveyer of square pizzas with pepperoni so perfectly crisped that you couldn’t help but pick them off to eat first.

Then, there are the famous regional styles of pizza.

Chicago has the scrumptious deep-dish style to its name.   It is so artery-clogging that, delicious as it is, I think I could only eat it if I planned on making that my SOLE meal of the day.  Don’t get me wrong, it’s tasty, but…like KFC’s double down, there’s never any good excuse to eat it.  The guilt would far outweigh the pleasure.  And very few food items could make me feel that way.

The best city for pizza, according to me and my highly informed mozzarella-bloated gut, is New York.  Now, you could pretty much walk into any old hole-in-the-wall and walk out with a satisfying slice of thin, al-dente crusted, grease-pool-laden pizza.  Pizza has never been so easy.  I soooo wish the UK had a NYC-style ‘by the slice’ place.  Alas, it’s all kebabs when you’re drunk and hungry.

Whilst there’s not much chance of you getting a bad slice in NY, there are a few categorizeable varieties:

A.)  Rays–This is your bog-standard slice.  I don’t mean that in a pejorative way, of course.  I mean that it’s this:  The norm…

B.)  Pastsy’s style–Anything that’s sold as coal/brick/or wood-burning oven.  Typically, these places are less ‘by the slice’ establishments and more ‘order a whole pizza with your family’ places.  The notable difference is in the change to the crust.  The ‘burning’ method…whichever it is that they use…typically adds a smokey flavor to the dough and crisps it up a bit more.  Usually, the finished product is a bit thinner too…

C.)  Novelty slices–I can think of a couple of establishments in the city that dare to be different.  Two Boots cooks up pizzas influenced by ‘two boot’ destinations–boot-shaped Louisiana and boot-shaped Italy.  It’s hits the Cajun angle fairly well and has fun specialty pies that are all named after films/movie characters.  (The Mr. Pink has chicken on it, I believe).  Two Boots.  Another angle that seems to be cropping up a bit more is the ‘Pizza Truck’.  NYC has some of the best mobile food vendors in the world.  It’s not all just stale pretzels and lukewarm hot dogs.  If you ever walk by a food cart in the city and notice a long line, it’s worth hopping into the queue.  I grabbed a slice of pizza from this particular vehicle when I was visiting my friend Nikki down by Wall Street.  It was surprisingly awesome.  It was saucey, with a sharp parmesan finish.  Delish:  Grandma\’s Pizza Truck

Well, imagine if all three of those varieties came together in one glorious slice.  What’s that?  You can’t because you don’t want to be disappointed by yet another unachievable dream?  Well, you’re wrong.  It CAN be done.  It HAS been done.  Here’s where we circle back to talking about Artichoke on 14th Street: 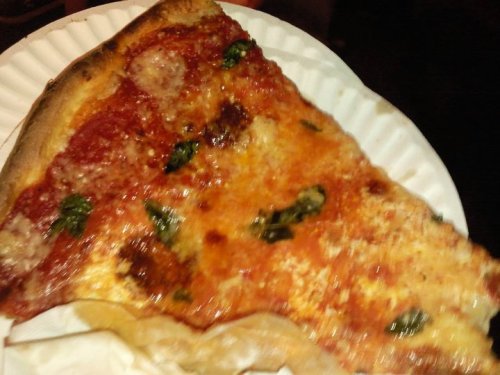 On my recent visit, I was lucky enough to be asked to read at a supercool event, Sideshow:  The Queer Literary Carnival Sideshow .  I really have to thank the amazingly talented Cheryl B. and Sinclair Sexmith.  First of all, they put me on the show:  It was super fun, I met some excellent people, and it made me feel smart.  Secondly, and perhaps more importantly, they invited me to take part in their post-show ritual of a visit to Artichoke.  Without them, I may have ended my summer sojourn to NYC without going or even knowing about its existence.  I don’t want to live in the alternate reality where that might have happened.

Artichoke is the best of all three varieties because:

A.  It has a by-the-slice mentality like Rays…complete with orange grease pools on each slice.  But, it uses sauce a bit more liberally than most Rays-style joints.  I like that.  I’m a fan of the sauce.

B.  It’s smoky-crusted like Patsy’s.  It had a delightfully singed but still somewhat chewy consistency.  Plus, just look at that beautiful basil, will ya?

C. It has its own novelty slice (the Artichoke-style looks like it uses artichoke dip INSTEAD of tomato sauce…it’s very popular).  But, it doesn’t spend all of it’s energy trying to be weird or different.  It’s confident and brassy like Debbie Harry.  Not trying too hard, like Ke$ha.

Artichoke is slightly more expensive by the slice (by about a buck), but you get what you pay for.  Anyway, as you’ve probably guessed, it’s highly recommended.  Probably the best thing to come out of Staten Island (where it originated), in a long time.  Artichoke

Finally, and back to the general theme of pizza, it’s what I miss most (foodily-speaking) about The States.  When people ask, “Gee, Kate, you’ve been over in England a long-ass time, what do you miss most about home?”,  I normally shout desperately ‘pizza’ before I can even say ‘family and friends’ (even though I  miss them most).  At least they can get on a plane and come over though.  Pizza would never get through security.